First post for me in a while…I’d been in gaming hibrenation, but it’s Spring again… 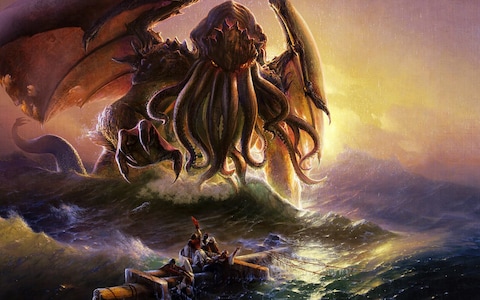 I’ve had this on my back burner for a while, a Mashup of the [URL=”https://en.wikipedia.org/wiki/Cthulhu”%5DCthulhu%5B/URL%5D Mythos and the [URL=”https://en.wikipedia.org/wiki/The_X-Files”%5DX-files%5B/URL%5D. And while I’m waiting for my D&D gaming group to be available to play again in a couple of weeks, I thought I’d move it to the front burner, throw some dough against the wall, and see what stuck.

A few questions for input (or at least thought by me if no one else is interested):

1) What rule set – The no-brainer is to use the Call of Cthulhu rules and update them for more futuristic things (like cell phones – whether they be the 90s monstrosities from the original series or more modern phones, gps, etc.) or something else altogether (FATE, d20, GURPS) OR even a completely homebrewed (or Frankensteined) ruleset (I dabble in these a lot). What are your thoughts?

2) Nature of the Cthulhu Mythos *actual* involvement – Is it direct and apocolyptic OR (as I’m leaning towards) very subtle and mostly an influencer of the Cthulhu cult (with an occasional off-camera intervention…perhaps with that crucial witness npc)?

3) OK, so we have the Old Ones, Cultists, FBI Agents (and other competing adventurers)? What else? Do we keep things like the Men-In-Black? What else? What would you like to see in there?

I’m going to keep building on this, both at rpg.net and on my blog at High Adventure Games. Your thoughts would be most welcome!

I’ve posted before about “gamer movies” (that is, movies *about* gamers):  Gold, The Gamers (crap, I just realized that I’ve never posted on The Gamers before….note to self, do so),  etc.  I don’t personally do much LARP (though I have on occasion….Doc Pazzazzu puts together some neat stuff). Here’s the site for a indie movie about the whole LARP set…its called Monster Camp.

I’ve never done any LARPing *that* elaborate (no costumes and such)….snigger, snigger.  Then again,  we were playing modern day Cthulhu as ourselves (no costumes actually needed) so perhaps my snooty, I’m not *that geeky* is unfair.  If you are a casual gamer, just come here for the

movie reviews, or are here completely by accident (that Megan Fox tag  in the previous post might have brought you here), a Geek Hierarchy has been developed by the “Brunching Shuttlecocks” (reproduced here via the Creative Commons). Enjoy,

OK, its time to build the PBP I mentioned here. I plan on doing two of these actually. The second, HAGIS: The Mythos Files, will essentially be The X-files meets Call of Cthulhu. I’ll table it for a bit since its a bit more complicated…plus my wife will be involved. She’s not a gamer as of yet, but has expressed an interest in such a game…in fact, I’m not sure if we’ll do that one as a PBP…It might need to be live. The first will be HAGIS: Atlantean Adventures (Aega Mythea?) and will be  set in the Atlantean world (High Swords & Sorcery a la Bard Games Atlantean Trilogy…with my own spin of course).

The Atlantean Trilogy (Bard Games’ The Arcanum, The Lexicon, and The Bestiary…the last two of those were also published as a combined volume called Atlantis: The Lost World). This will serve as the core setting. It is essentially our own Earth or proto-Earth before the Oceans drank Atlantis. It contains all the real-world cultures all mashed up anachronistically. This is my favorite setting of all time.

FUDGE/FATE – I like the aspects provision or Fate (kind of like the Spiritual Attributes of TRoS). We will be making free and frequent use of  metagame elements. In fact, I plan on the players having much more information than their characters do. It will be expected that player and character knowledge will be kept in different buckets…I’m going to think about how much interchange between these two will be permitted/encouraged. I also am looking at the 5by4 Magic system on Steffan O’Sullivan’s page….or maybe the Magical Medly system…hmm, need to think on this.

Castles & Crusades – I really love this game. I’m still not crazy about the Vanican Fire’n’Forget style magic, but its really not that hard to write that out. The point here is that I’m going to be using class-like structures, call them archetypes, whatever. Pretty much pick a class from any source D&D, C&C, The Arcanum, etc. and I’ll adapt it to our Mashup.

the HAGIS TriDie system – as previously discussed, roll three d20’s and use the median result (unless we have some meta-game funk going on and then either the hi or lo result is used….).

True20 – I’m looking at their positive/negative tags and their magic system.

No Kung-Fu is better than swords crap.  So monks and martial artists are pretty much out for this dance.

As I look at this, I realize that my Mash is a mess. That’s OK though; it was only intended as a brainstorming session. I will work on tightening this up and throwing some of it out….I only need *one* magic system for this. I can always try another one later.

My three-year old and I worked on this one together in Bryce. While we were sitting at the computer making picures, she indicated that she wanted to make a boat. Well I have wanted to do the same thing (using a neato DAZ Viking Galley that I found on line and hopefully some neato shadows). It was fun to do with her, but it made one abundantly clear:

I don’t know crap about how to do lighting/shadows properly in Bryce (or DAZ) and that I need to read the manual/do some tutorials (OK, I guess that’s two things). I am also going to have to take up Doc Pazzazzu on his offer to help me out with this (in real time using the screen/control-sharing capabilities of Zmesh.

I’d really like to render a decent “ship in the distance”-type image. Maybe a ghost ship (aka, just add some fog to cover up that I don’t know how to do the lighting shadows right yet). Anyway, I’ll be working on it. The Doc and I are suppose to work together on a image of the city of Avalon…..I’d also like to do Atlantis AND a distant shot of Mount Doom (Lord of the Rings).

completed masterpieces…..”Damn Perfectionists”). There are a lot of new images in the queue that we can look forward to him sharing. Here is one he recently shared with me. He told me that his wife’s comment when she saw it was “Well, she might get away…..she has guns”. And to that I think we all know the proper response…..

Sorry Mrs. Pazzazzu. That’s just how I see it in this picture…..especially as it portrays the dark, maddening world of the Mythos. Dead Cthulhu himself would be proud (if he could feel something so base as “pride”). That reminds me that I need to post my HAGIS Mythos development…..er, I need to finish it. I’ve actually been working on it very little due to lack of freetime/energy for computer work (I do a lot of computer work for the day job…and sometimes there’s just nothing left on that front when get home). To hold you all over (ok, to hold both of you over), I thought I’d link in some new “Calls for Cthulhu” off the old YouTube. Now direct to your psyche from R’lyeh-beneath-the-waves, we bring to you Dead Cthulhu: