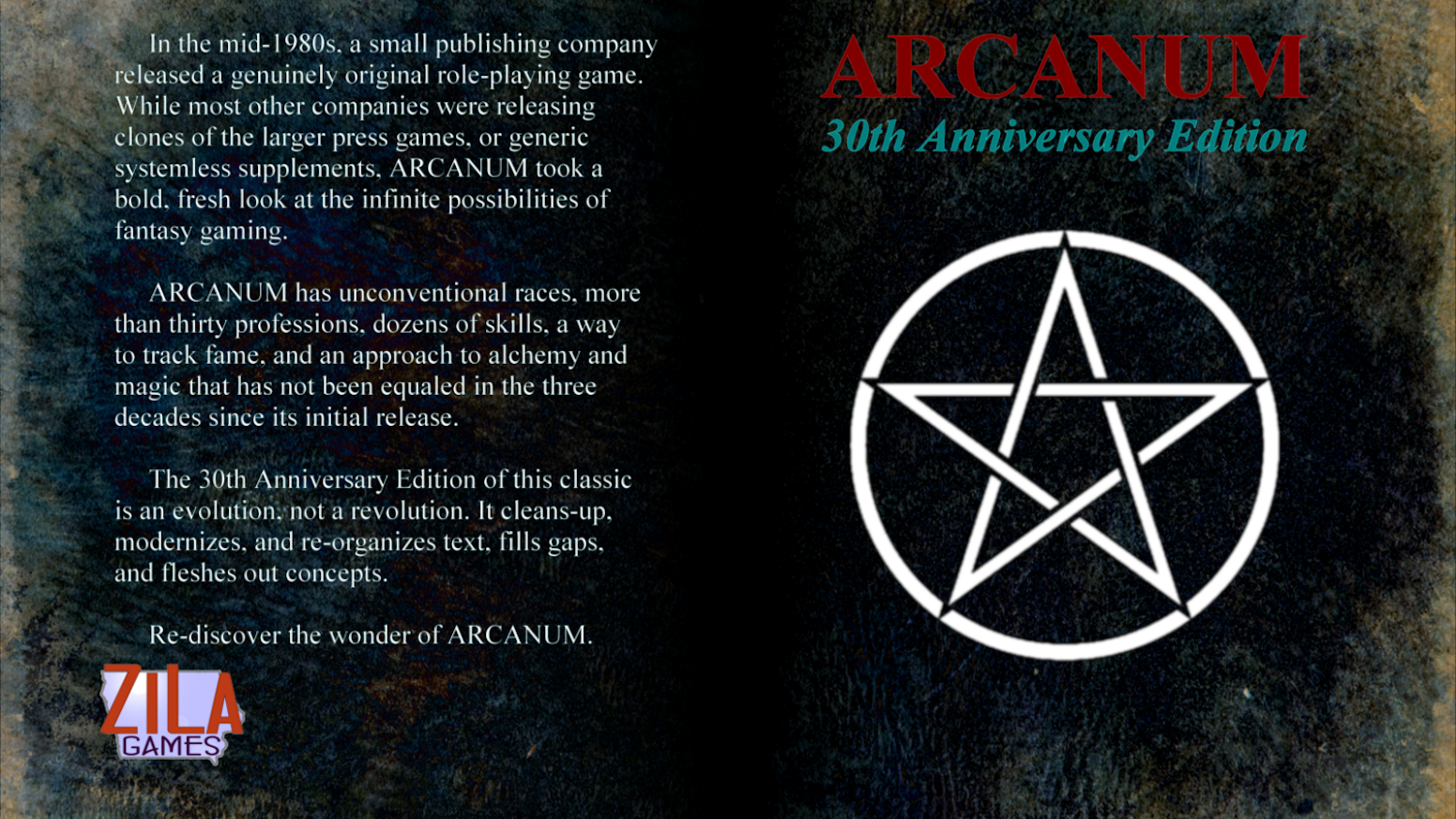 I just got this update from K. David Ladage on his 30th Anniversary Reprint/Refresh of the Atlantean System Kickstarter….I’m getting pretty excited.

13
…and statistics…
Posted by ZiLa Games (K. David Ladage) (Creator)
So, I was asked to provide a little more detail as to the state of the project:

Pages — the book — currently (see Artwork, below) — is 364 pages long. All of the text has been written and edited with the exception of the last two pages. These two pages will hold the Wall of Heroes — a listing of the names of all those that contributed high enough to be included. The names, as they will appear, will be based on a survey question, once those go out.

Artwork — Cory has done a lot of art for the book. In fact, it will all be his handiwork when it is all said and done. The artwork for the main body of the book (i.e., everything but the Bestiary chapter) is down to 28 pieces that remain. The Bestiary I need to do some adjustments to in order to get a solid count of the number of pieces that section will need. Depending upon what needs to happen there to get the artwork in, the number of pages within the book may go up slightly. I want to limit to book to 368 pages (personal reasons).

Bestiary — as indicated, I have some layout work to do in the Bestiary in order to fit in some art. Right now, that section includes thousands of potential encounters. That is because the chapter includes not only beast stats, but templates that can be applied to the beasts so as to alter them slightly or drastically as the Game Judge may desire. For example, the DARK template turns a creature into a demonic entity (e.g., DARK HORSE = Nightmare). It is really a chapter I am quite proud of, especially given how long it took me to write it.

Surveys — I will send out the surveys when it is near time to order the books and fulfill the orders. Addresses can change, and that is something I do not want to deal with. Call it being skittish if you wish. With all that went wrong the last time I attempted this, I want this to go as smoothly as possible. I assure you, surveys will go out, people will get their books, dice, character artwork, and so on.

Thanks all. I really appreciate you all for your support and continued patience.

And like that….we have a group!
Pen and Paper, Table-top Dungeons and Dragons….compleat with tweaks and house-rules (not too many)! Fathers and Sons (and Daughters if I can suck her in…)! Here we go.

Here’s the breakdown:
1) The Player Characters (PCs) are HEROES. They don’t focus on piddly schtuff. More on this later.

2) The Setting – The Atlantean World: in the 80’s S. M. Sechi and the rest of the Bard Games crew put out the Atlantean Trilogy: The Arcanum, The Lexicon, and the Bestiary…later revised into The Arcanum and Atlantis – The Lost World (Lexicon/Bestiary combined). This is probably the most evocative, flexible, awesome setting ever for fantasy role-playing. It is essentially our Earth thousands of years ago, before the oceans drank Atlantis….More on this later (it deserves it’s own post). Anyway, this is the setting!

3) D&D 5E – The most current incarnation of Dungeons & Dragons is probably the best ever (and I’ve never said that about a current “new and improved” rule set before). They’ve taken all of the best of the old and mixed it with the best of the new. I like it a lot!

4) Players Roll All the Dice – this innovation puts all the rolls in the hands of the players and can greatly increase player engagement. They roll an attack vs. a static defense score, but they roll a defense vs. a static offense score….and so forth. More on this later too!

7) Looking at removing secondary “damage” rolls and putting the damage determination into the primary “to hit” roll. More on this later.

8) Hitpoints are always maximum for PCs

9) Magic Missile may be a bit different…..more later.

I’ve previously posted about the TriDie (aka mid20, roll 3d20 and take the mid result) and it will feature front and center in the Aega Mythea mashup! In fact, no other dice will be needed.

In getting back to developing and describing HAGIS, let’s talk about the main mechanic randomizer…the TriDie. Torben Mogensen, esteemed RPG Mathematician of DoomTM,has been discussing this very mechanic in his recent article on RPG.net. Torben (and Woodelf….where, o where art thou, Woodelf?) were the first to propose this mechanic to me on the Yahoo RPG Create board.       Let me explain….no, there’s no time….Let me sum up. Rather than te … Read More

There’s been some discussion on the web relating to using “player-facing rolls” (e.g., Gamer: The Blogging: Player-Facing Rolls.). In D&D, this is where you flip the mechanic over and have the players roll defense vs a static offense statistic (offensive rolls are made normally). Here’s a link that explains it more from the SRD. The DM essentially never needs to touch the dice (unless they’ve got some hidden roll they want to make).

I’ve considered them before and while I’ve never used them, the idea intrigues me. However, I’ve noted that there is a strong polarization around the idea. People either love the idea or hate the idea. Some of the “Love” may be the shininess or appreciation of its cleverness and some of the “Hate” may be related to “don’t mess with how I’ve always played my game!”. This thread on the Troll Lord Castles & Crusandes forum speaks to how old-school type games seem to perceive the idea (I know “Old-school” is a loaded term that may mean a lot of different things, but I think my point remains the same regardless of whether you view C&C as strictly Old-School or not).

I’ve been thinking of using it for my Atlantis/C&C/HAGIS mash-up, but am leaning against it. Not that I don’t like it, I do. I just want to remove any perceived bumps in the road. With the limits on all our time, all the logistics in setting up a game, and all the changes I’m making to rules that will require some explanation….I just don’t want another thing to explain. Perhaps another time I’ll use it….or swap it in later. We’ll have to see. I’d love to hear what others think about it….especially those who’ve used it.

I  live…..again.  OK folks. I’ve officially arrived at a decision. I’m returning to the “active GM” chair. No more just tinkering with mechanics. I’ll aim my tinkering to a specific game/group. And it won’t be for a planned out, extensive campaign. It will be for a one-shot…just to play. That one-shot may grow into something bigger, but for now I’m aiming for a one-shot game. Details to follow…..but as a teaser, I’m thinking some Atlantean Fantasy goodness is in order.

[As an aside, I really need to trim the number of categories I have…..jeesh.]