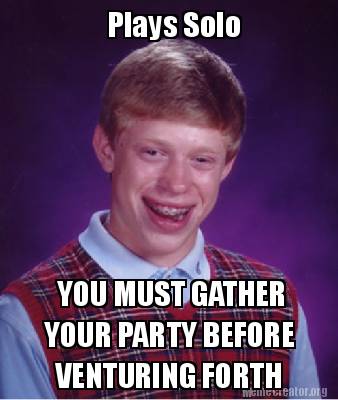 Back at the table

Wow! It has been a while and I’d lost my way. Too much going on to indulge my hobbies, but I’m back. After some unexpected surgery and the mandatory recovery time, I’ve realigned with some of the fun things in my life.  This post was originally entitled “Father’s Day Update – Summary Campaign with my Minions”, in which I described my re-emergence, my recent involvement/re-involvement with Table-Top Role-playing Games, and described the fun new campaign I’m running with my family this summer.

You read that right….”Father’s Day”. I’ve been working on this post for more than a week now. Now some of that is related to making decisions on the nature and form of the campaign as I wrote about them, but mostly, I think I was just trying to write about too many different things at once. Obviously, that isn’t helping me actually complete any writing in a meaningful time frame and it certainly isn’t developing the sort of engagement for which I was hoping online. So I’ve decided to break things down into smaller bite sizes and see how that goes.

By D&D, I have come to mean essentially any table-top role-playing game (generally, meaning with a fantasy slant, but not always).  HAG and Aega Mythea essentially grew out of my need to house-rule and tinker with game engines/mash stuff up and out-of-the-box D&D is somewhat of a rarity in my gaming history, but in this case (as it were), you will see that I actually mean actual D&D…D&D 5E to be more exact. More on that later.

With regard to the most basics of the campaign, let’s start with the players and their circumstances. First of all, due to some unexpected surgery, I am home on the mend, healing up from that. Hence both my time and inclination to play again (you look death in the face and you may find yourself refocusing your life a bit….in this case, time with family). I have three players: my wife (who loves games, but was never really into D&D, but is excited to give it a go) and my two kids (12 and 10, both of whom have a little experience with D&D and such games). We are very excited to do this together and I’ll be sure to provide updates and expansions on this post as appropriate.

With regard to Baldur’s Gate, for those not in the know, the game is now available on Steam and elsewhere as an Enhanced Edition. I highly recommend you pick it up.

Doc Rotwang recently posted on his blog, I Waste The Buddha With My Crossbow: The Voices Are Whispering Their Strange Maths To Me, about using the most excellent D&D Rules Cyclopedia with the Forgotten Realms setting….from the original Boxed Set.

I loved that set….it was from a simpler time before the power escalation, Time of Troubles crap-fest. Don’t get me wrong, I liked playing Baldur’s Gate, but somehow the storyline that preceded it and all the canon material that’s been built up over the years is a bit much.

He goes on to flesh out some specifics  on what his game will be about.…Rotwang, always the master mixer, is bringin’ some Swashbuckling to Sembia. It sounds like a fun game. Thanks for the inspiration, good Doctor!

I’m setting up a game with my kids and grabbed those very materials….not so much for the rules really (my kids are 3 and 5), but more for inspiration (and pictures for the kids). We’ll be using some simpler, off-the-cuff rules in our game….and it looks like ours will feature pixies….I’ll be posting more on this later.

I’ve been a little slow on posting over the last two weeks. In part due to personal time constraints and in part because I’m hoping to get some more Aega Mythea materials worked out and posted.

I have some time over the next few days; so there should be some new development content up here by the end of the week.