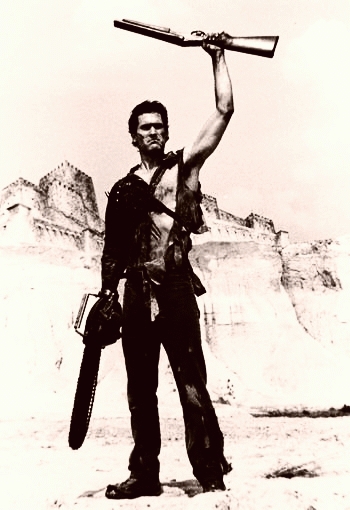 To reference the King of California while ignoring tense, I’m Back. After letting daily life (mostly work…..OK OK, I’ve been playing some Vampire Wars on Facebook too….that stupid little game is addictive….) interfere with posting here at the HAG site, I noticed a rather rude comment in the queue with regard to my most recent post on the new series Krod Mandoon. Aside from highlighting what a mental midget he is, Chad (who I like to call “Hanging Chad”….sounds like something that might deposit itself in one’s underpants) unwittingly highlighted to me that I hadn’t posted here in over a month. So once again, I’m Back….and with my Boomstick.

The site traffic has been really good even without me actively posting recently. In the February timeframe, we went over 100,000 hits (and that doesn’t count those who read us via RSS, Atom, etc.)….Now, I know this is really small potatoes (especially when compared to the illustrious  Raincoaster), but considering the size of the niche here (Gamer Geeks, etc.), we’re all pretty happy that anybody is reading at all. So keep stroking my ego. I’ve been working on some posts and will have some fresh, new content up soon.

Additionally, I know that Elric the Damned must have seen new movies….Let’s hope he tells us about them soon. Incidentally, the household in Bridgewater has recently subscribed to Netflix, so I may have some thoughts on movies, etc. soon too.

I just took the “Which B-Movie Badass Are You? quiz that I saw on Raincoaster’s site(How ya like that, Rain, I stole that post back?). God I love these things when they turn out like this. Is it geeky to say, “I am sooooo ASH”. By the way, it reminds me of Elric the Damned’s review of The Trilogy. Enjoy!

Hail to the King Baby,