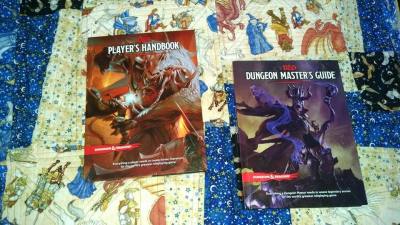 OK, when it became clear what D&D 4E was going to be all about, I essentially checked out of the whole D&D thing. Not to say that I left gaming or anything like that; I’d essentially adopted the Pathfinder RPG for my crunchy bits game and Castles & Crusades (coupled with my old standby The Atlantean Trilogy) for my regular (commercial) gaming. I also have been working on various incarnations of my HAGIS/Aega Mythea development.

All of that being said, though I largely rejected D&D 2E when it came out, I’d always been at least aware of what it was, its release schedule, and all that….I just wasn’t playing it (at least not until many years later when I joined a game that was run by a good friend who ran 2E). In this case, I was caught flat footed as it were. Not only did I not know 5E was in the works, I actually missed its launch. I was that far removed from the gaming world. I’d stopped reading the gaming blogs of others, stopped visiting gaming forums, basically checked out of the public discourse of gaming. I was just doing my own thing.

So when I became of this 5E and what it was all about, I was both ashamed of my ignorance (would they take my geek card away???!?!?) and intrigued by their back to the basics approach. This weekend, I ran out to my local bricks and mortar gaming store and bought the PHB and DMG for the new D&D 5E.  So far, I am liking a lot of the design decisions. My minions are chomping at the bit to give it a playtest…and I’m planning on acquiescing in the very near future. We’ll then be in a much better place to determine just what the take home is for 5E. Watch this space for more on D&D 5E, my own gaming projects and just general gaming stuff in general as I return to the public face of gaming. I’d been using my facebook page in place of blogging, but it is now clear that approach is severely lacking.

I saw this article on the long-awaited, and waited, and awaited movie of J. R. R. Tolkien’s “The Hobbit”.

McKellen hopeful of end to Hobbit rift Staff and agencies
Tuesday October 16, 2007
Guardian UnlimitedSir Ian McKellen would be “very pleased” to reprise the role of Gandalf the wizard in the long-awaited adaptation of JRR Tolkien’s The Hobbit, the actor has said. US reports suggest the ongoing negotiations over the Lord of the Rings prequel may be close to being resolved. Firstly, it is understood that New Line, which backed the original trilogy, only part-owns the rights to The Hobbit, with rival studio MGM also maintaining an interest. And then there is Rings director Peter Jackson’s separate legal dispute with New Line, this time over profits from the franchise.

Sir Ian has therefore taken the opportunity to restate his claim on the wizard’s weatherbeaten hat, whether Jackson, who was at one point effectively blacklisted by New Line over the legal dispute, is able to return for the new film or not.

“I am glad to read that [The Hobbit] is looking more and more likely,” said the 68-year-old actor. “I would be disappointed if they didn’t want to have the original Gandalf. I suppose if I am still functioning and working well, it is very likely I would be asked to do it and if I were, I would be very pleased to do it.”

Sir Ian said he hoped Jackson would direct the movie, but said he had the director’s blessing to play Gandalf for someone else. “When Peter announced he had withdrawn from The Hobbit, he sent me an email saying ‘Because I am not going to do it, it doesn’t mean you have to do the same. Of course, you must play Gandalf whether I direct or not’,” said the Shakespearean actor.

Sir Ian portrayed the character in the three Lord of the Rings movies, one of the biggest box-office successes of all time, and earned a best supporting actor Oscar nomination for the part in 2002.

The Hobbit, first published In 1937, describes the adventures of Bilbo Baggins as he joins Gandalf and a group of dwarves in a quest to slay a dragon. During the quest, he discovers the powerful ring that plays a central part in the Lord of the Rings trilogy.

Guardian Unlimited © Guardian News and Media Limited 2007The Hobbit had been slated to be made shortly after Tolkien’s Lord of the Rings movies were released (relatively speaking). However, due to some disagreements with regard to funds between New Line and Peter Jackson, there’s been some delay. The situation is pretty complicated, I’m sure, but I’m finding it difficult to keep interested in the legal wrangling. Just make the freakin’ movie already.

Anyway, Sir Ian McKellan, who played Gandalf in the LotR series is still very amenable to reprising the role in a Hobbit movie….even without Peter Jackson Directing. Sir Ian, in my opinion, did a pretty good job in the role for LotR’s. Still, I

can’t help but wonder how the first choice for the role (Sir Sean Connery) would have worked out. Apparently, Connery didn’t relish the idea of living for a LONG stretch of time in New Zealand (they filmed all three movies together)…I suppose the alure of Scottland kept him home.  My brother and I have discussed this at length and have come to the conclusion that barring any other major changes in casting (or directing), Connery would have stolen the show.

EVEYBODY STAND BACK….I suspect that the hordes of McKellan fanboys (and girls) will be pelting me with rotten produce straight away. Its not that I don’t appreciate McKellan’s performance as Gandalf, I guess I just always saw Connery in the role (even before it came out that he’d been asked)…..I suppose that makes me a bit of a Connery Fanboy…ah well, so be it. It may interest some that Jackson seems to have agreed with me.