Just in cast you were unaware, the new Star Wars is the bomb! It achieved the pacing and drama of the originals, something the Prequels failed at in epic proportions. It is so good, it is almost like Jar Jar never jarred.

Machete is a Roberto Rodriguez movie about illegal immigration and revenge. 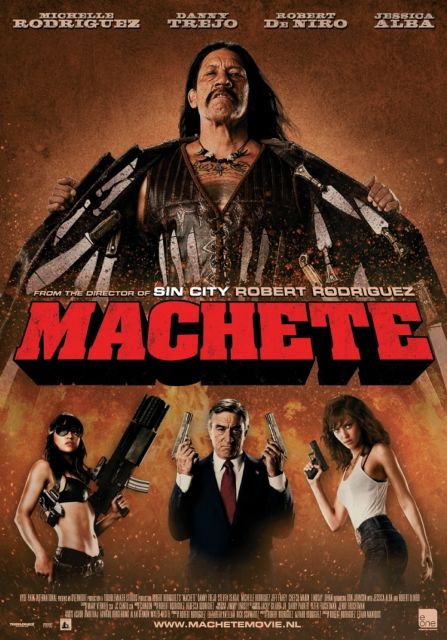 This finely styled salute to 1970s B action flicks earns an enthusiastic 8.

I must say right up front that I left the theater with a big smile.

The genesis of this movie was as a mock trailer between Planet Terror (Rodriguez) and Death Proof (Tarantino) in Grindhouse. And boy, am I glad that they made it into a full length film!

To top it off, I saw it in Cinemark XD – that is extreme digital, which means a massive floor to ceiling and wall to wall screen much like IMAX with surround sound and in digital. WOW!!! Totally worth the $12 ticket. Screw driving down to Columbus for IMAX – this is almost as good for less money and no 250 mile round trip.

As you saw in the trailer, Machete is hired to assassinate an anti-immigration Texas state senator by an evil businessman, who betrays Machete by having him shot in the act of trying to shoot the politician. The rest of the movie is revenge and bloodshed. It’s actually a compelling plot and flows along nicely.

Machete is played by the wonderful Danny Trejo. Mr. Trejo has graced us with his presence in From Dusk Till Dawn and The Devil’s Rejects (sequel to House of 1,000 Corpse – Rob Zombie, both awesome flicks) as well as two billion movies. Seriously. Take a look at his bio on IMDB.com. He has appeared on The X Files, Monk, Desperate Housewives, Stargate Atlantis, Burn Notice and The Young and the Restless. He is one large, ugly, mean looking Mexican dude. He fits the role well and offers a strong, relentless presence throughout the movie. He is very credible as a former Mexican federale who has been done wrong. And he is a stud.

But wait, there’s more! Don Johnson is the evil lawman, who is a little too enthusiastic in his border patrols. He runs a vigilante operation. Robert De Niro is the state senator; he is perfect in this sleazy, self-righteous role. Steven Seagal is the evil drug lord, Torrez. He is getting a bit old and puffy and adds a bit of humor. Cheech Marin is a priest, of course… Lindsay Lohan is the drug and sex addled daughter of the evil businessman. That role must have been quite a stretch for her. Jessica Alba is the honest Customs & Immigration officer. Her mixed martial arts using two stiletto high heels as stilettos was quite entertaining. Of course, Electra and Elise Avellan appeared as two nurses. These hot twins cannot act but they pout well and look great toting around big automatic weapons. They also appeared in Rodriguez’s Planet Terror as the gun toting babysitter twins. Michelle Rodriguez (no relation to Robert) appears as Luz, a taco stand operator who happens to run the illegal immigrant version of the underground railroad. You have seen her in Avatar, Fast & Furious, Resident Evil and Girlfight. Last but not least is Jeff Fahey as the evil businessman. He has a deep, whispery voice that makes his evil ooze out of the screen and into your ears.

Is that a great cast or what? They all did a great job.

In the final analysis, this movie replicates the rocking, action flicks of the 1970s that no one remembers. De Niro probably won’t get an oscar for this one, but the movie is very fun and very entertaining. The action is almost cartoonish at times, but is done intentionally that way, which is very, very fun.

Iron Man 2 is an excellent sequel to an outstanding movie. 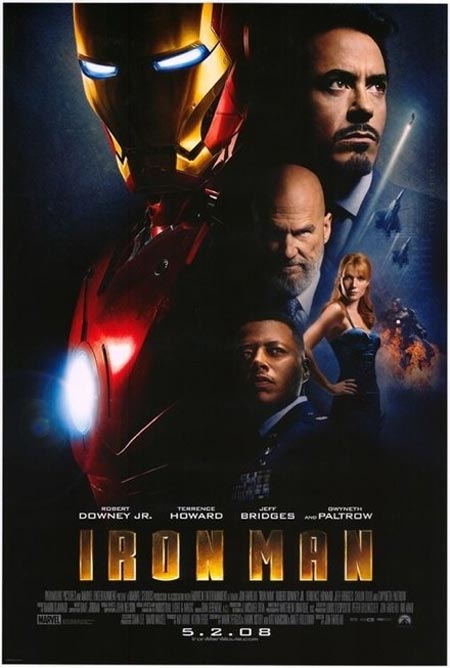 This action-packed romp earns an 8.

Robert Downey Jr. continues his success playing the ego-driven, narcissistic hero, Tony Stark. “I am Iron Man.” He loves the adulation (and chicks) that comes with his new public role. He also faces personal issues as the side-effects of being Iron Man develop. It is a tough balance for an actor to portray, and Downey does a solid job bringing Tony Stark believably to life.

The rest of the cast put in a good performance, too, but are eclipsed by Downey. I didn’t recognize Garry Shandling as Senator Stern, who seeks to get the Iron Man technology for the government. His face is now quite flabby. Gwyneth Paltrow returns as Pepper Potts, Stark’s personal assistant and voice of reason. Scarlett Johansson is introduced as a sexy and intriguing employee from the legal department of Stark Industries. She is fun to watch. Don Cheadle continues his role as Lt. Col. Rhodes, another voice of reason and balance to Tony Stark. He isn’t particularly compelling, but I don’t think he could do much more with the lines and role that he was given. Sam Rockwell is excellent as the sleazy, unethical and spiteful CEO Justin Hammer of weapons company Hammer Industries, the primary competitor to Stark Industries for military contracts. Ah, Mickey Rourke. What a beautiful man… He does a durably decent job as villain Ivan Vanko. We are given enough background for him to be believable, but he does pull off some unlikely things as any super-villain does in these stories. It’s not a problem. He is more human and with more straightforward and believable motivations than many villains. He is a good choice for the role. And what movie would be complete without Samuel L. Jackson? He expands his role as Nick Fury of the Avengers project.

The plot makes sense. It takes the next logical steps that would naturally evolve from the first movie. The government takes a national security interest in Iron Man and Ivan Vanko rears his ugly (literally) head. It provides plenty of palatable action and excitement. That is all of the plot that I shall provide to avoid spoilers (and additional work by me).

Don’t forget to stay for the teaser scene at the end of the credits (like a certain me did). 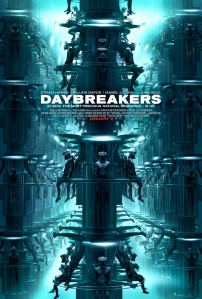 Daybreakers tells of the world when vampires rule and humans are almost extinct.

This entertaining piece gets an 8.

The story is set in 2019, 10 years after bats infected the human race with vampirism. Most of the population has turned with some humans remaining – voluntarily and some not-so-voluntarily…

Vampires work regular jobs and have essentially maintained normal human existence except that activity is at night and buildings are fortified against sunlight. The problem is that the human population has dropped to a level where blood is getting in short supply and a good substitute has not been developed. When a vampire’s diet faces a significant deficiency of human blood, it begins to mutate into a mindless mutant with wings and claws – not a pretty sight…

Ethan Hawke is a brilliant vampire scientist working on an effective human blood substitute for a large biotech company. The main business of the company is running a human blood farm – a large chamber in the building has hundreds of columns with circular platforms that hold unconscious humans like so many bags of fresh blood. It totally reminded me of the human farm in The Matrix. The blood supply is dwindling as the humans are dying.

Speaking of other movies, Ethan Hawke must pass through several biometric security gates to get into the biotech’s research building, just like he did in Gattaca. While this movie does borrow some visual ideas from elsewhere, it is very well done and has an excellent plot. Hawke is ultimately sympathetic to humanity’s plight and gets caught up in its fate. There is adventure and several plot twists. That is all that I can prudently tell you.

Ethan Hawke is a sympathetic vampire fulfilling his character well. Sam Neill is the unsympathetic CEO of the biotech company as the stereotype goes – one could hardly imagine a good CEO or corporation (which is one of the reasons our country will lose it competitiveness and wealth). The acting was good overall. Willem Dafoe is pretty entertaining as one of the human rebels on the loose.

Daybreakers is clever, interesting and very entertaining. It is pretty much at the end of its run in the theaters so you will most likely have to wait for the DVD, but seeing it in the theater would be more enjoyable.

Legion is yet another addition to the baby-saves-the-world/baby-brings-on-the-apocalypse genre.

End of the world flicks are usually entertaining, and Legion brings enough satisfaction to rate a 7. If the last 15 minutes hadn’t drifted into cheesy territory, it probably would have earned an 8.

“Mommy, what changed to make God angry at the world?” “I don’t know, Honey. Maybe he is just tired of all the bullshit.” God has decided to end the human race (a second flood) by sending his angels to kill everyone. The Archangel Michael (Paul Bettany) rebels choosing to protect an unborn child that is the key to humanity’s survival. As clearly shown in the trailer, Michael and a band of strangers hole up in a diner out in the desert (looking much like the parts of NM I will be visiting in 2 weeks – maybe my vacation will be more interesting than planned…) to face God’s legions of angels.

The plot is standard apocalypse and follows it faithfully. Save the baby; save the world. Why is never explained, but that is never necessary in the apocalypse plot line. The story is satisfying, an enjoyable end of the world struggle. The last 15 minutes drift into the “come on, this is not very realistic” zone assuming that you have been able to willingly suspend disbelief regarding angel-possessed zombie like humans seeking to kill an unborn child. That is the magic of movies, but let’s keep it believable!

Dennis Quaid has really developed into an excellent, grizzled-veteran-of-life actor. That is a great role for him as the hardened and mature, yet stand-offish older guy that just wants to be left alone. He has wisdom to share with the younger characters and tries to set things right and protect the innocent. But his age usually fails him in the physical struggle, and he sacrifices himself to save the others. He fits the role perfectly in Legion and also in Pandorum (Lieutanant Payton), which rated a good 7.

I am pleased to see Jon Tenney get some roles beyond The Closer (Agent Fritz Howard) and his more recent role in Brothers & Sisters (Dr. Simon Craig). His part in Legion is relatively minor and a bit flat. But he is a likeable actor in his typically quiet characterizations. The rest of the cast did a decent job in their stock roles: older man of faith, younger semi-ruffian with the opportunity for redemption, young pregnant waitress on her own, bitchy/slutty teen with bitchy/critical mother and quiet/passive father (Jon Tenney). We almost forgot the mysterious, strong, keeper of secrets rescuing hero (Paul Bettany as Michael.)

This movie was fun. It has been out for just over a week, but it won’t be out much longer as there were only two other people in the theater this fine, sunny (31 degrees) Sunday afternoon.